Celebration Atlas — Holiday Traditions from Across the Globe

I have a confession to make: I love Christmas. In my home, Christmas means putting up a tree which the entire family decorates, participating in multiple Secret Santa circles, and carols played on our stereo all day. Of course, no two people celebrate alike, and although most of the world embraces the holiday spirit, each country adds its own special twist to the festivities — giving a fascinating glimpse into the culture and history of the region. These are some of my personal favorites Christmas traditions from around the world: 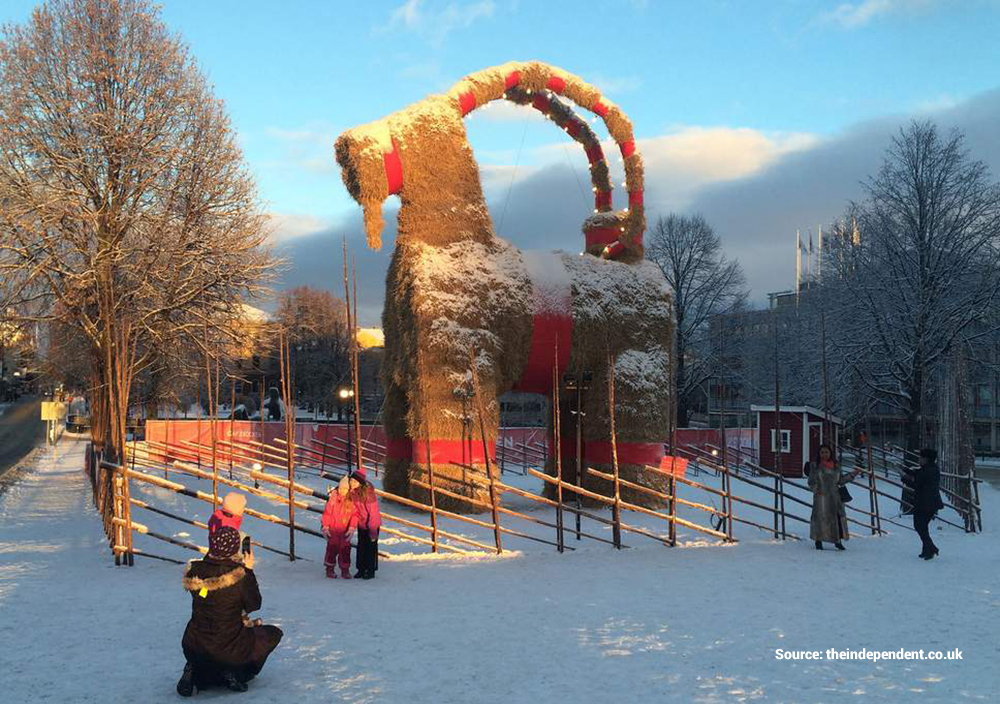 In Gävle, Sweden it’s not the holiday season without a giant straw goat in the city square. The Gävle goat, or Gävlebocken in the local tongue, is a larger than life version of the Swedish Yule Goat, and is erected every year at the beginning of Advent. It’s true claim to fame however is its disastrous history. Over the years, the Gävle goat has been a victim of multiple incidents of arson and other catastrophes — despite stringent security measures. This tradition has been a staple in the town for over six decades, and in that time the goat has survived the holiday season only 13 times. 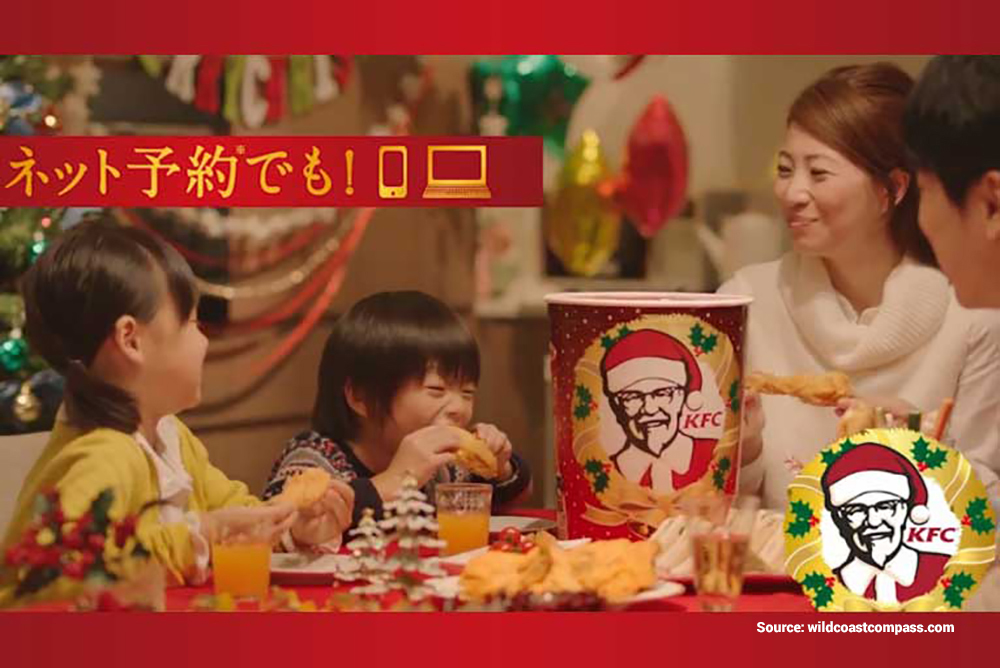 Christmas Dinner is a major part of the holiday celebrations in most western countries. In Japan however, they do things a little differently. Rather than a home-cooked meal, the Japanese traditionally enjoy a dinner at KFC. The event is so popular that the restaurant asks people to book two months in advance. The tradition began in 1974, as a way for foreigners to enjoy something close to home food during the holidays. It gained enough popularity among the locals to remain a common practice to this day. 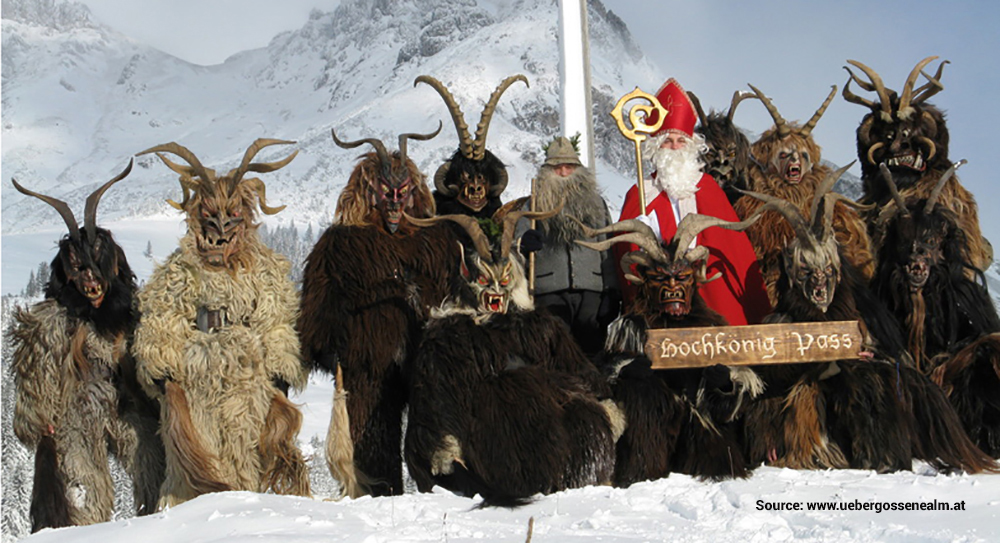 In many countries, naughty children will wake up to coal instead of presents under the tree, but the mischievous kids around Europe fear a more sinister fate. While good boys and girls get treats from Saint Nicholas, those who misbehave get a visit from Krampus instead. The creature is described as “half-goat, half demon” and punishes children on the naughty list — though the method differs from region to region. Krampus is just as made-up as Santa himself and he is equally popular in the region, often featured on holiday cards. Some towns even have ‘Kramups runs’ where young men and women dress as the creature and participate in large parades.

Night of the Radishes 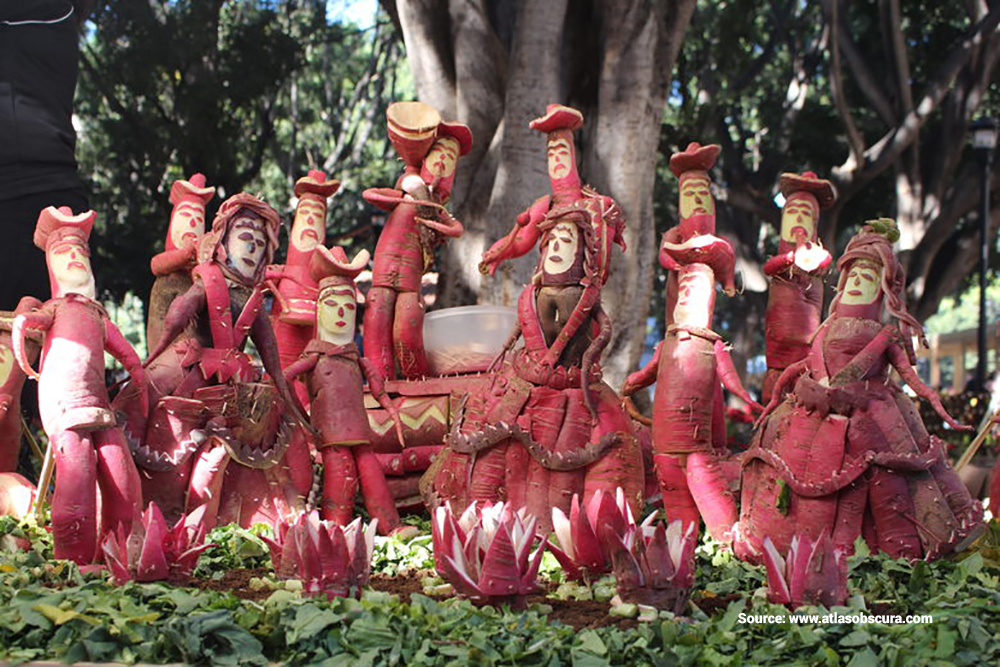 The city of Oaxaca has a holiday tradition that may seem more in-line with Halloween than Christmas — vegetable carving! Oversized radishes are carved into intricate sculptures, which are then displayed in the town and judged under various categories.The tradition dates back to colonial times, when radishes were first introduced by the Spanish. Local farmers, talented in wood carving, began carving the vegetables to attract customers at the Christmas Market which took place on December 23 every year. In 1897 the city turned this pastime into an official competition. Today, Oaxaca has dedicated land solely for growing radishes for the competition, which attracts over 100 contestants and thousands of visitors.

Christmas on the Beach White Christmases are a pleasant daydream in the southern hemisphere, as Christmas falls in the summer months. That doesn’t stop the celebrations however, especially in Australia, where the party moves to the waterfront. Beach parties are popular Christmas event for many Australians, characterized by summertime activities such as swimming, volleyball, and picnics on the sea shore. This long standing tradition turns the local beaches into a party zone, where entire cities can come together as one big family.

None of these Christmas traditions would ever make it on Norman Rockwell greeting card, but they manage to keep the spirit of the holidays alive. Food, community, and festive cheer run common through them all, making them familiar to us despite their foreign nature. So this year, let’s take the opportunity to explore a new way to celebrate the holidays — who knows, you might even make your own Christmas tradition!