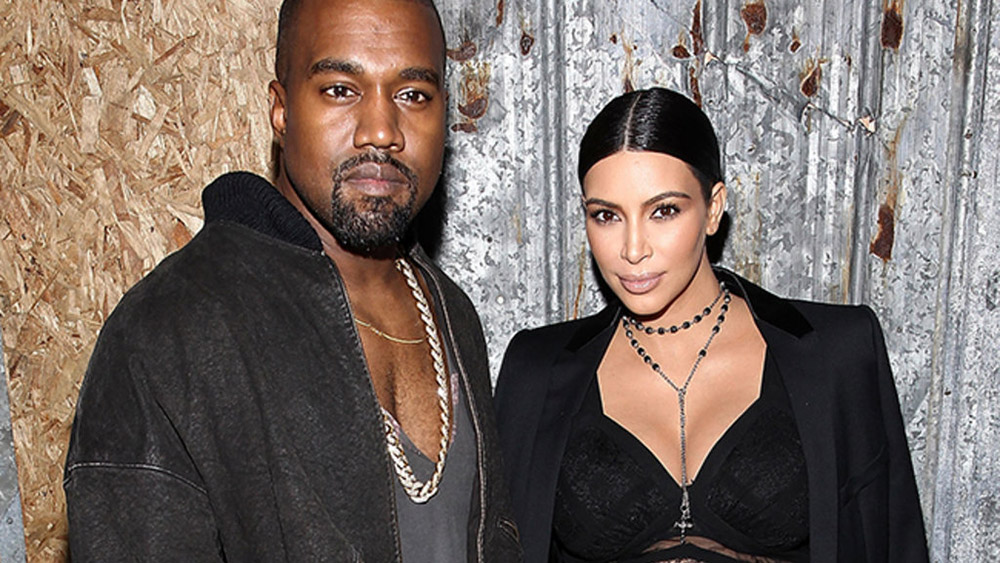 As a famous man once sang — “No one man should have all that power”. But a duo as dynamic as that man, Kanye West, and his wife, Kim Kardashian, might just be able to handle it.

If you follow the media, you know that the couple packs a powerful punch. Being highly visible in the public eye and at the forefront of pop culture has made them a force to reckon with — ‘Kimye’ have taken over music, fashion, television, and more. With Kim’s omnipresence in pop culture and West’s larger than life personality, they easily bag a spot as one of the most powerful couples in media today.

Anyone that knows Kim and Kanye knows that the couple truly embodies the mix of comfort and style — the essence of athleisure. Everything from their appearance to their work to their opinions (which they are unafraid to voice publicly) shows that they are comfortable in their own skin.

A Duo that Embodies Style and Comfort

Whether they’re recording music, making TV appearances, or traveling around the world, Kanye and Kim are not only ‘keeping up’ with the athleisure trend but helping define it — Kanye’s Yeezy line is one of the most coveted footwear and apparel brands in the space. Its immense popularity can be attributed to successful marketing strategies, Kanye’s larger-than-life presence, and scarcity of products.

Athleisure made Yeezy as 1-2-3

In December 2013, Kanye West announced a shoe collaboration deal with Adidas, and the Yeezy Boost 750 was released in February 2015 amid massive hype. The label shows Kanye’s eccentric taste in fashion in full display, as a symbol of athleisure wear that has managed to gain widespread popularity thanks to Kanye and Kim’s sphere of influence among the public.

The brand’s avant-garde apparel is eye-catching in its appearance, which leads to massive visibility among consumers. But Kanye has the added benefit of using Kim Kardashian as his muse — marketing for the apparel brand includes paparazzi pictures of Kim as she goes about her day wearing Yeezy clothing. This guerilla-style campaign gained mass media attention and contributed to the brand’s popularity.

The Yeezy line has played a big role in the recent resurgence of athleisure.

Wouldn’t it be great if you could make comfortably spacious, bulky shoes that don’t get immediately criticized for making you look like you’re 50?

Kanye’s Yeezy line has a number of such shoes, making them fashionable again, such as the Yeezy Mud Rat 500s. 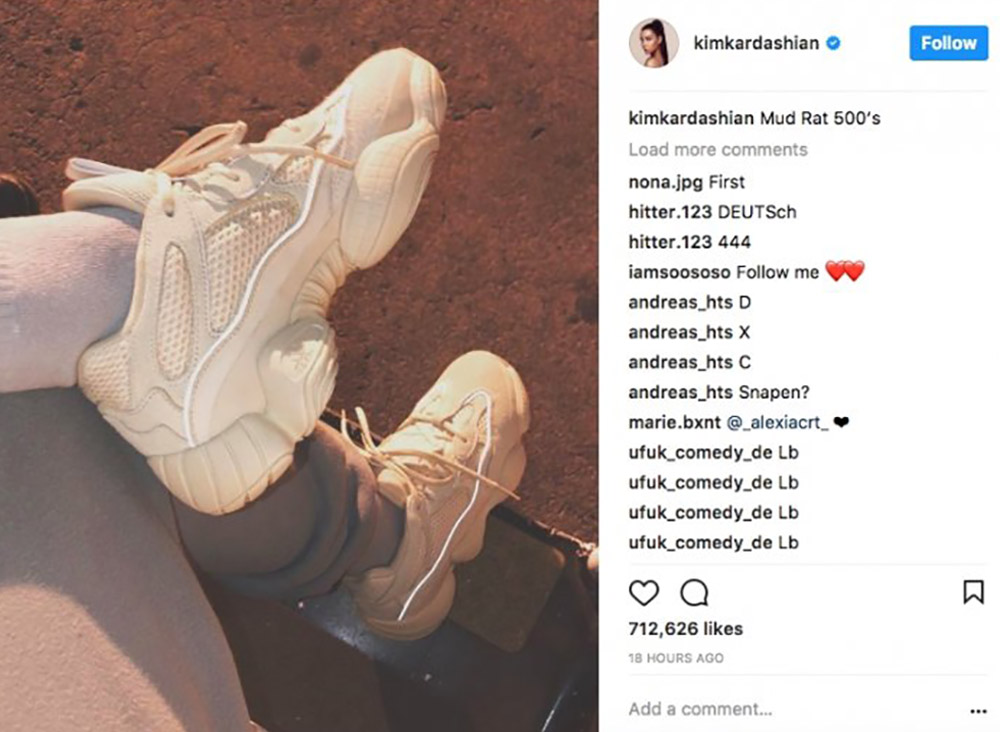 Kanye’s easy-going attitude doesn’t stop at his shoe collection. Kanye attended rapper 2 Chainz’ wedding in a suit and a pair of Yeezy slides that might have been a tad bit too tight (pictured below). 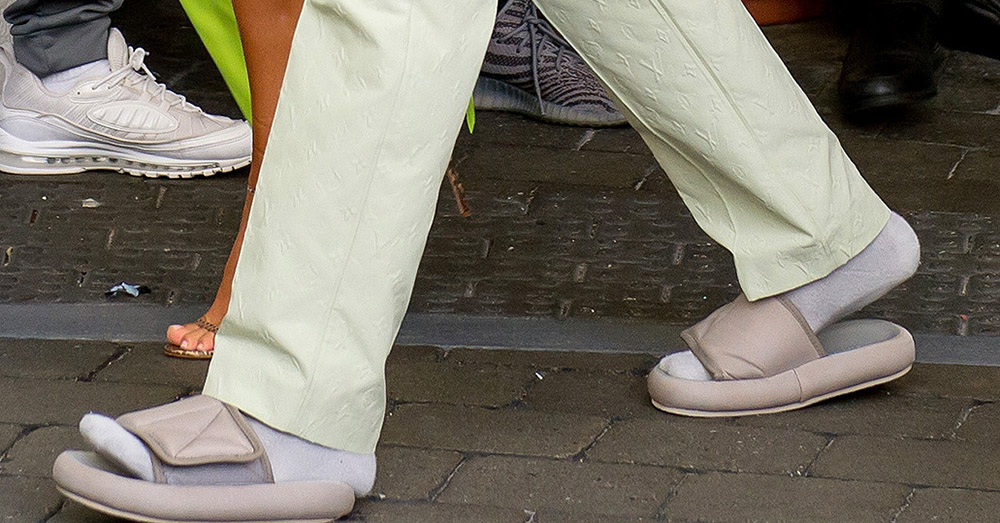 And you’ve got to appreciate the man’s sense of humor about his unconventional choices. When he was criticized for the ill-fitting slippers, Kanye posted the following picture on Twitter: 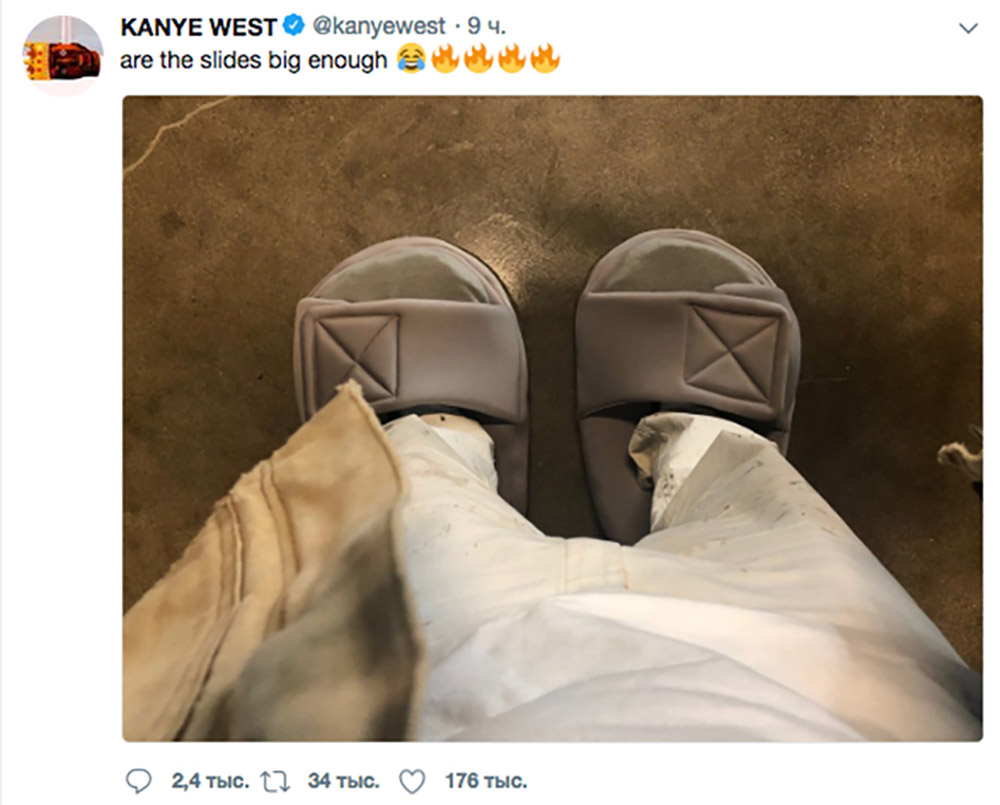 The sisters are bringing cycling shorts back

Cycling shorts were fashionable in the 80s, but they’ve since gone out of fashion — mostly because they were awkwardly shaped and made of spandex, which doesn’t exactly scream haute couture.

But the sporty bottomwear made a big comeback in recent times, with credit to Kim and her sisters — the Kardashians played a big role in bringing cycling shorts into high fashion.

A pair of Yeezy-style skintight shorts were the highest selling product after Amazon Prime Day in the UK in 2018, showing that the appeal of Yeezywear goes beyond American celebrities to the global mainstream.

Cycling shorts have always been functional and ensured comfort while pedalling, but they are now categorized as stylish casual wear too.

Kanye is no stranger to speaking his mind in public forums. From grabbing the mic from Taylor Swift at the VMAs to declare Beyoncé deserved to win (“I’ma let you finish, but Beyoncé had one of the best videos of all time!” remains one of my favorite quotes to this day) to having a publicly aired meeting with President Trump in the Oval office — Kanye has been outspoken about his outlandish thoughts, all on the record. A welcome change from most public figures who keep their controversial opinions to themselves, fearing backlash.

Kim is no stranger to being an open book either. After all, her career really took off thanks to Keeping Up with the Kardashians — a reality show that puts the personal and professional lives of the  Kardashian-Jenner blended family on public display.

This openness and comfort in being yourself is the spirit of athleisure. The Yeezy line shouts “Do as you like” — an attitude Kanye and Kim fully stand for — and inspires you to make choices that represent who you are. From bringing back cycling shorts and ‘ugly sneakers’ to their bold public remarks and political opinions, Kimye have made it fashionable to embrace one’s true self — earning them our coveted title of ‘Power Couple of Athleisure’. Jatin is an all-round fine guy — a real people’s man, if you asked him. Some of his favorite things include technology, evolutionary psychology, and Rick and Morty.